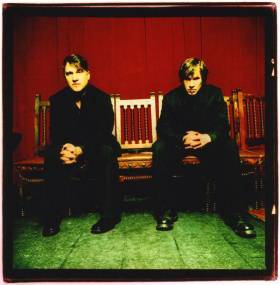 Last night, two of the leading men from the mid-nineties American alternative rock scene joined forces for “An Evening with Greg Dulli and Mark Lanegan”. Dulli (Afghan Whigs, Twilight Singers) and Lanegan (Screaming Trees, Queens of the Stone Age) are long time friends, and last year released the acclaimed “Saturnalia” album under the guise of The Gutter Twins. For such iconic performers, the Royal Festival Hall is surprisingly empty, but those present were treated to a captivating and intimate evening.

The show was a stripped down acoustic affair with the pair - dressed in black, naturally - performing material spanning both their back catalogues, joined by their Gutter Twins band mate Dave Rosser. The opening duo of the Twins “The Body” and “The Station” leads into seldom performed material with The Afghan Whigs “If I Were Going” and Screaming Trees “Sworn and Broken”. As well as drawing on their own extensive material, their performance also sees them taking on a number of covers, including José González’s “Down the Line” and delta bluesman Bukka White’s “I Am In The Heavenly Way”.

Dulli leads the show, switching between guitar and piano and bantering with the crowd. Lanegan remains silent between songs, but when he sings he more than makes his presence known with his remarkably rich, whiskey-soaked baritone as they perform fresh interpretations of their much loved songs. Undoubted highlights were The Afghan Whigs fan favourite “Summer’s Kiss”, and a rousing rendition of Lanagen’s “Resurrection Song”.

For the encore, they perform “Candy Cane Crawl” and “One Hundred Days” before the dark hearted duo round of the night with another cover, a stirring rendition of Nick Drake’s “Three Hours”.