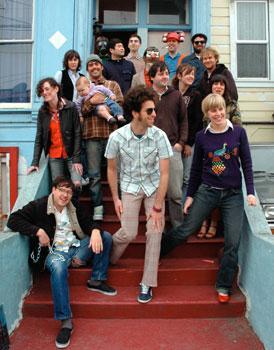 The weather may have been all over the place lately, but San Francisco based collective Still Flyin’ are doing their bit to raise Londoner’s spirits with a gig at the Barfly this Wednesday. The fifteen-headed party beast is the brainchild of Sean Rawls and their quirky upbeat ska-tinged indie pop has a lot to offer fans of I’m From Barcelona and Architecture in Helsinki. After causing a stir at at the South by Southwest festival in March, they’re over here to promote their debut album “Never Gonna Touch the Ground”, released earlier this year on Moshi Moshi records. They’re fast gaining a reputation for their energetic and celebratory live shows, so given the intimacy of the venue, this is likely to be a very special evening of merrymaking.

Still Flyin’ play the Barfly in Camden on Wednesday 22nd July. Support comes from psychedelic country popsters The See See and eccentric indie types The Grave Architects. Tickets are £8 and can be bought here.