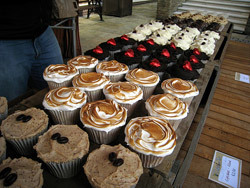 Image by sue_n_alex
Sure, our love of all things cupcake-ular is well documented, but does the prospect of a giant-sized, all-conquering cupcake makes us a feel a little queasy and e-number crunched?

This Thursday, at the Covent Garden Real Food Market, the world's largest ever cupcake will make a nervous debut on the East Piazza. Nervous, because it will be a short-lived appearance: thousands of people will soon be wolfing it down. The baked behemoth will measure 2 metres by 1.25 metres, and it's expected that around 2,000 will enjoy a slice.

There's divine precedence to this project: it's a little-known fact that, during Biblical times, Jesus' attempt to feed the five thousand, as documented in the Gospels, was supposed to be accomplished using a giant cupcake, which the rudimentary cooking methods of the Levant in that era were sadly unable to bake. The hungry were instead given bread and fish, but no such difficulties are foreseen in this modern effort, which is designed by Culinary Olympic winner Michelle Wibowo. Even if you get there too late to grab your piece, there are plenty of other things to sample at the Market.

Get down to the East Piazza, Covent Garden for 1pm on Thursday, 16th July, for a piece of the action.