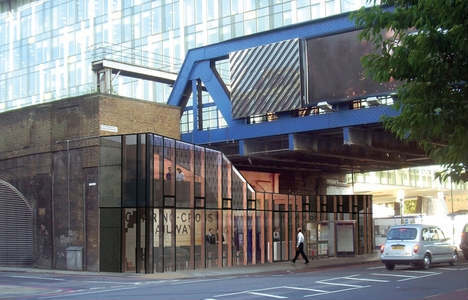 A proposal to build a modern café in the former entranceway to Blackfriars Road station, across the road from Southwark tube, has won planning permission.Glas Architects knocked up this design, which encases a three-metre wide section underneath the archway in glulam frame and etched glass. Complying with requests by Southwark council to respect the station's original features, the proposal offers views of the recently restored rear wall and displays the defunct station's signage. A mezzanine level, seen to the left of the pic, will also allow glimpses into the original entranceway, which last saw passenger traffic in the 19th centuryThe architects are now working on a construction schedule for the café, which is tentatively named Arch 88. Find out more about the short history of Blackfriars Road station over at Abandoned Stations.