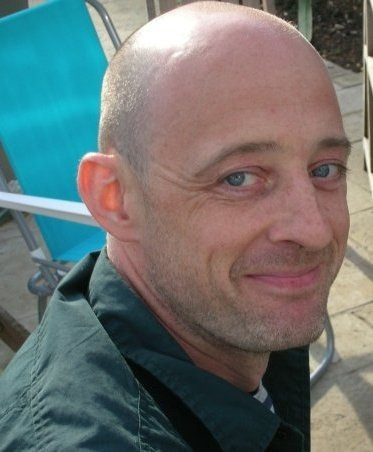 Londonist loves to eat. And we like to cook as well. Hey, we just like food. But we thought for a change it would be nice to catch up with some of the dudes and dudettes who really feed London - its chefs.

Tom Norrington-Davies is the chef/owner behind Great Queen Street restaurant. Which is, er, in Great Queen Street in Covent Garden. And before that he was one of the leading lights at the original gastro-pub, The Eagle in Farringdon. He is also the author of two very successful cookery books.

What got you into catering?

It's funny, I just turned forty and I have found myself asking a lot of questions about how I got here. I think my family had a lot to do with it. I’m not from what you’d call a “foodie” family, but my family’s meals, and the preparation of them, all of that was given great importance when I was growing up. And loads of my childhood memories revolve around being in kitchens. No one ever seemed to beetle off and cook alone in our house. In fact it was kind of expected of you to pitch in. So from a very young age I remember making meringues with my grandmother, Saturday morning fry ups and Sunday lunch curries with my dad, and any number of school night meals with my mum. I was fascinated by it all. And when I went off to college I took jobs in kitchens to eke out my grant (see, I’m old enough to remember student grants) and before I knew it, I was in London looking for someone to take me on as a commis. I don’t think I ever stopped to think that cooking might become my career, oddly. I just loved making food and if someone was happy enough to pay me for it, then why not do it all day every day?

What would you say to someone who’s thinking about food as a career?You have to love the craft. And by that I mean the singular act of cooking. There is so much nonsense in the media about stuff that only really amounts to peripheral clatter: I enjoy watching the “sleb” chef programmes as much as anyone but 99.99999% of us are never going to be on telly, never going to get Michelin stars or end up with squillions in the bank, and even those that do have usually spent years grafting away at the stove first. To someone who doesn’t love it, the job is utterly crap. You work late nights and early mornings, all week and, sometimes all weekend (I’m surpised I even know how to spell that word!). The money is usually as rubbish as your social life, the environment is hot and sometimes very stressful, but if you get a buzz out of the one activity which all of that revolves around, the cooking itself, then give it a go. I do see more of the wrong people coming for jobs these days though. They’ve seen Gordon and Jamie, and they think that cooking is just the boring bit on the way to the big time. You can usually spot them: they might turn out a perfect steak but they also think that pastry is for girls, and that a good bowl of soup will miraculously make itself without due care and attention. You can tell a lot about someone by how good they are at soup... But I’m rambling now!

Read to the end for one of Tom's favourite recipes....

Great Queen street is always pretty busy, I think because we are a more day to day place than a once in a blue moon treat.

This is a horrendous name drop, so forgive me, but I once got to cater a party for Joan Rivers. I was warned that she wouldn’t eat anything and that I might not even meet her but that turned out to be bobbins. she ended up coming into the kitchen and yakking about food for ages, distracting me horribly. Which I loved of course. Eventually She put on an apron and said. “Lemme help! I’m going to make you the only thing I was ever any good at. Butter curls”. Now, I hadn’t seen butter curls since I worked in a seaside hotel in 1986 but I remembered enough to know that Joan’s were rubbish. Every single one she tried went wrong and she was getting the giggles, well, actually she has this raucous laugh, which is very infectious. I told her never to give up her day job.

Anything that can split (or curdle) will do it when I’m trying to teach someone how to make it for the first time. Its become a superstition for me to pre empt every mayonnaise lesson with my “now, this will split” speech.

Give us a really hot cheffing tip…

Oh blimey. Do you know what? They are already out there. All the old wive’s tales are true, they are the best tips. Especially the one about watched pots. They will not boil, even if you yell at them.

And your secret ingredient?

I’m ashamed to say it but it is probably sugar. A tiny (and it’s usually really tiny) pinch of sugar is often what’s missing from hundreds of dishes, from curries to consommés. I worked with a lot of Oriental cooks and that’s where I picked up the habit.

What do you eat at home?

I lived in the far east for a couple of years and I have never kicked the habit of living on rice, usually with very simple vegetable dishes (my partner is vegetarian). At work the food is meaty, fairly rich and a lot of it revolves around achingly slow cooking. We live on thirty second stir-fries.

Tricky one this, but in your opinion London’s top eatery is…

That’s not tricky: it’s impossible. I am the opposite of monogamous when it comes to restaurants. I do have a pretty hefty crush on Richard Corrigan’s place in Mayfair, but I definitely fancy Bocca di Lupo in Soho. I've had a long love affair with St John in Clerkenwell and of course I’m officially married to The Anchor and Hope in Waterloo. I still see my ex, the Eagle. See, I’m a total slapper when it comes to eating out.

What do you think London’s next big foodie thing will be?

I think this has already started, but what used to be thought of as the lower end of eating out is suddenly improving massively. A bowl of noodles in Chinatown, decent Spanish tapas, wood fired pizzas, chippies and burger bars with a conscience. You don’t have to slum it to get a takeaway any more and lets hope this will go from strength to strength. Plus, of course better and better food emporiums, like yours!

I’m sure it won’t be a secret for long, but The Silk Road, on Camberwell Church Street, which has got to be London’s first Xingiang eaterie, is fantastic.

Would you cook a well done steak?

Yes. I used to be a bit of a bully about steak…most chefs are, but if it is cooked and then rested properly a steak is just as good well done as it is any other way. Trouble is, it does need a really good rest once its been cooked through, so you have to be brave enough to tell someone that their sirloin is going to take at least half an hour.

Londonist has heard rumours about temperamental chefs, so tell us… have you ever spat in someone’s dinner?

No way! You do get stressed out behind the stove, and it is really hard not to take criticism personally. I can handle complaints coolly if people keep it polite. But there are some diners out there who feel their evening is incomplete unless they get to insult waiters and make life hell for the kitchen. If a customer is being a total nightmare the best revenge you can get is to show them the door and tell them you don’t want their money.

This is an easy, fragrant, sweet and sour casserole:

1kilo diced lamb (use shoulder and neck meat for richness and flavour).

Half tsp fresh ground back pepper

Season the lamb pieces with the salt and pepper. Roughly chop the onion, garlic, celery and leeks. Halve and soak the apricots.

Heat the oil in a wide bottomed pan and brown the meat all over. Remove it with a slotted spoon and set aside.

Add the chopped vegetables to the pan and cook them gently, stirring occasionally, until they are tender and slightly opaque. Don’t let them brown. Meanwhile, dry roast the spices, left whole, in a frying pan over a high heat, for no more than a minute or so. Now add them to the vegetables and stir through the pot. Add the vinegar and tomato puree. Return the meat to the pan and stir it through the vegetables. Add just enough stock to cover the meat, bring it to a simmer then cover and cook on a low heat for an hour. After this time add the apricots to the pot but don’t stir them through. Leave them to ‘steam’, on top of everything else. Cover the pot again and cook for another hour or so. Keep checking the pot to make sure the stock has not reduced too much. You can always top it up if this is the case. Once the lamb is really tender (you should be able to cut the pieces with a spoon), remove the pot from the heat. Check the seasoning and now stir the apricots through the rest of the stew very gently. You can either divide the dish between bowls and garnish each portion with a tablespoon of the yoghurt, or serve the dish in a pot with a bowl of the yoghurt next to it.