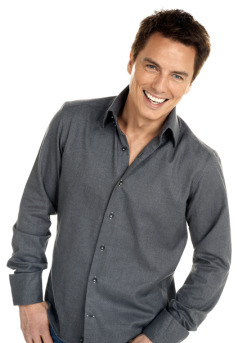 A review of a John Barrowman gig might not be quite what you'd expect to see pop up on Londonist, but when you're offered tickets to go and see television's most ubiquitous man - how could we refuse?

Ending his UK tour with a mainly full date at the Royal Albert Hall, a night with the Barrow Man was never going to be boring. Playing mainly from his current album 'Music Music Music' rather than his back catalogue of show tunes, it was a night filled with over the top camp dance numbers coupled with tender ballads and a sprinkling of glitter dust.

Joining John on stage was Avenue Q's leading man and Any Dream Will Do alumni Daniel Boys. While he might not have the on stage moves and the winning smile honed just yet, vocally he outshone the star attraction with a spine tingling rendition of 'Could It Be Magic'. Boys and Barrowman's duet of 'I Know Him So Well' was always going to be the show's magical moment, and the simmering tensions between the pair was perfectly designed to titillate the majority audience of horny housewives. Vocally perfect, their voices complemented each other delightfully and there was something fascinating about the Royal Albert Hall's stage suddenly being filled with a passionate gay love song.

Shown photos throughout from his colourful life, the show was more of 'An Audience with...' than a direct music gig with cheeky anecdotes a plenty. Introduced to stories about his partner Scott and parent, the most genuinely adorable moment came when John's mother and father joined him on stage for a bit of a boogie.

Overcome by emotion at the end of an impressively long three hour set, 'I Am What I Am' proved to be the final number with John resplendent in a suitably shimmering jacket. Catch him singing this properly as part of a show when he goes back to the West End stage joining 'La Cage Aux Folles' from 14 September.