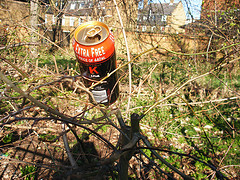 By SallyB2
Having a glass of wine with your picnic could become a thing of the past as Lambeth Council join Camden in proposing a borough-wide Controlled Drinking Zone (CDZ). 'Controlled' appears to be something of a misnomer though; 'ban'; seems to be what is actually being suggested albeit in a roundabout fashion.

Councils across the UK have decided we don't know what's good for us and say they are introducing the zones to combat public disorder caused by excessive drinking. Anti-regulation group The Manifesto Club claims that far from curbing problem drinkers, the zones are targeting picnickers and others enjoying a quiet drink al fresco.

We dislike seeing inebriates vomiting in gutters as much as the next person, but a bit of common sense is surely the order of the day here. What with CCTV being mandatory in bars and pubs, drinkers seem to be increasingly seen by the authorities as a threat if this latest round of over-zealous regulation is anything to go by.