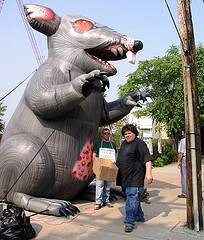 It is said that in London you're never more than five feet away from a rat at all times, a rather ghastly statistic if ever there was one. But consider the legend of King Rat, as mentioned in Rickard & Michell's fascinating book Living Wonders, in which they mention:

Workers in London sewers tell of rare sightings of the King Rat,a huge creature, paler than the rest, attended by a bodyguard of other large rats. On his appearance the ordinary rats become silent and motionless.

A scary thought indeed that some monstrous rodent lurks beneath our city conducting armies of thousands of pesky vermin to take to our streets, but goodness knows what lurks in the darkest corners. Consider the tale of strange tale from 1717, when a J. Petiver described a peculiar butterfly that had been captured on Hampstead Heath. It became known as Albin's Hamsptead Eye, a beautiful butterfly discovered by a Mr Albin. Such was this extraordinary find that many experts believed the insect to be a freak or hybrid until it was then discovered, living in huge numbers many years later, in East Asia and Australia! Proof that a variety of strange creatures can roam the capital despite the human congestion.

Scorpions have been found living healthily at London Docks. No real mystery when we consider that the rabbit, grey squirrel and domestic cat have over many, many years become settled inhabitants of our woods and homes.

As the natural world becomes engulfed by the shadows of concrete jungles, we should always require the need for mystery within the animal kingdom, and hope that out there somewhere, even in the hustle and bustle of London, there lurk creatures we know nothing of.