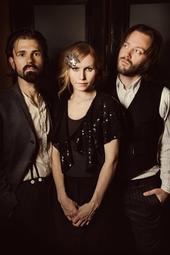 Nina Persson looks happier now. Being lead singer with Sweden's most successful pop export since ABBA® was evidently getting her down, and although the evaporation of mainstream interest in The Cardigans coincided with them putting out increasingly amazing albums, it was clear she wanted out. Tonight, on the last date of the first full European tour for her solo project A Camp (we're startled to hear her pronounce the 'A' like the indefinite article, always having assumed there was a B Camp and a C Camp), she seems relaxed and content.

That contentment doesn't sit well with the haunted introspection of her new album 'Colonia'. With song titles like 'Love Has Left The Room' and 'It's Not Easy To Be Human', it's apparent that the singer of 'Lovefool' hasn't lost her acidic viewpoint on life and relationships. The music itself is lilting, country-tinged grown-up rock and she is joined onstage by some suitably grizzled-looking musicians including her husband, composer Nathan Larson, although her greatest affection is reserved for Nicolai Dunger who turns up for the moving duet 'Golden Teeth and Silver Medals'.

Taking in amped-up versions of favourites from the first A Camp album including 'Frequent Flyer' and 'I Can Buy You', the set closes with a slightly cautious version of David Bowie's 'Boys Keep Swinging'. But Nina is clearly chuffed with the response for their final show, and graciously announces that the band will be sticking around to sign their merchandise after the show. Nice to see her in a benevolent mood for once.