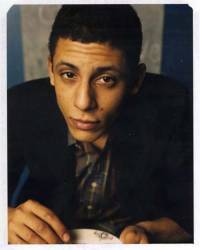 Miles Benjamin Anthony Robinson
Great things are expected of Brooklyn based singer-songwriter Miles Benjamin Anthony Robinson as he brings his ragged modern folk rock to The Lexington on Tuesday. Having already caused a stir in his homeland (featuring in Spin magazine’s albums of 2008), he’s playing his first shows this side of the Atlantic in support of the UK release of his eponymous debut album. Featuring members of Grizzly Bear and Kyp Malone of TV on the Radio, it’s being mooted as this year’s “For Emma, Forever Ago”. Quite a claim, but as anyone who’s heard recent single “Buriedfed” (an imaginary account of his own funeral) will attest, the Bon Iver comparisons are more than just casual hyperbole and his album is destined to become just as treasured. Catch him now before the rest of the world takes notice.