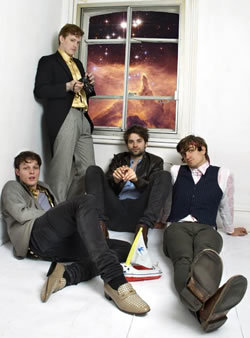 Described by the Guardian as a "four-piece jerky-pop-rock band", Official Secrets Act have been making waves around the country as they bring their witty and eccentric tunes to the masses.

We sat down with their charismatic bassist Lawrence, who intrdouced the band and gave us some things to do around London...

Hello Official Secrets Act. Who are you and what are you upto at the moment?

We are back in London for the first time in a while. We played Koko supporting The Rakes last night and then we had a bit of a party that ended in various corners of Camden. Now I'm sitting in a cafe in East London answering your questions. This is quite strange for me cause i'm normally a bit of a West London boy, and OSA are leading the South is the new North campaign by making Stockwell/Tooting our headquarters.

Where are you from originally, and what does London do better?

Half of us are from the wilds of Scotland, and the other half are from the satellite suburbs that cling on to London through sheer determination. We met in Leeds during the heady days of 2005 when Dance To The Radio was starting as one of the best labels in the country and the Kaiser Chiefs were laying wast to daytime radio. But we came together in a squat in Manchester in the summer of 2007 and moved to London cause although we loved the North we were always the outsiders who liked Blur more than Oasis. Also our friends were putting on some amazing nights down here and we wanted to be involved (Bloody Awful Poetry and Dance Magic Dance spring immediately to mind!)

What London location has been the most significant in the lifetime of Official Secrets Act?

Scar rehearesal studios under the railway arches in Camden was pretty special. It was a hard mistress to us that forced us to play super good and stay discplined to our craft. We got signed in Tommy Flynns on a crazy Saturday night during the Camden Crawl when song was in the air, and just off Picadilly Circus you can find the telephone booth that David Bowie is standing in on the back of Ziggy Stadust and the Spiders from Mars, that's pretty cool. And for something a bit different, the view from Richmond Hill is as good a place as any to plan the new British Escapism that we dream of.

I think we'd all have our own seperate answers, but we'd all agree that we miss the Astoria very much.

OSA officially volunteer to be the new art installation in the Turbine Hall at the Tate Modern. We'll be like the Beatles in Hamburg meets Volta era Bjork. Beautiful colourful outfits, and 8 gigs a day. That is how OSA do things.

Mike came up to Edinburgh to see us play a squat party dring the festival, and the pandemonium that ensued persuaded him that he had to do whatever it took to join the band. However he couldn't afford a train journey home to London, so he busked the festival ridden streets of Scotland's fair capital in a bid to raise money to get a train down to see us. He has a pretty beautiful voice so he got it pretty quick i reckon.

Just for people to get their heads out of the north and east. They both rule but get west. See the lush greenery of Kew Gardens and Richmond Park, fall in love with an art student from Ealing and forever nurse a broken heart when she leaves you, pose in Knightsbridge, but see the hollow hole at the middle of it all, and drink real ale on the riverside in Chiswick and plan how you're going to spend your summer as planes criss cross across the sky travelling ever lonely onwards.

Their debut album, Understanding Electricity, is out now, and they play the JD Set at the Luminaire on 15th May and most of the summers major festivals.