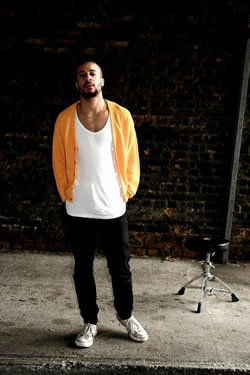 The latest soul sensation to hit the airwaves, Elviin looks set to become one of 2009's success stories. Inspired by his St Lucian parents' Caribbean records, he counts Jack Penate as one of his friends and has been on tour supporting Gary Go and VV Brown recently. The Guardian named him as one of their new artist of the day, so fingers crossed he's not another artist destined to become bland background music.

We were fortunate enough to sit down with Elviin recently to let him introduce himself...

Hello Elviin. What are you up to at the moment?

Aside from gigging, I'm writing songs for other artists and going to do some collaborative tracks.

Before going on stage, do you have any rituals?

Just to relax really. I always see it as the calm before the storm. I do dance around a lot on stage despite being chained to a piano so makes sense to save all my energy for showtime.

Where are you from originally, and what does London do better?

My parents were born in St.Lucia I was born here. Londoners know who we are better! We're just doing our own thing if the world catches on...lucky them! Oh yeh and Indian food!

What London location has been the most significant in your musical career?

Each home my songs were written in - I've moved twice in 2 years so they have to be up there on that list.

Hoxton Bar and Grill - great size venue and people songs seem to go down well every time I play there! But now I've jinxed that so...won't be playing there again. Oh yeh, they do amazing burgers there!!! :)

The place/balcony overlooking regent street where celebs switch on the lights from. Or a capsule on The London Eye.

I'd love to play where the buskers do on the tube! In fact that'll be my 'cool' location No.1

I haven't had to busk before but never say never - it's a scarily fragile industry right now.

That down the road from me actually lives a Bernard Manning lookalike....and for some reason he can't stand me either! Strange.