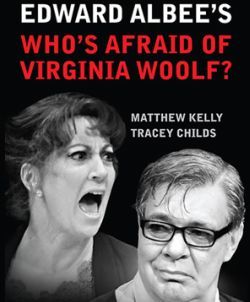 Trafalgar Studios' new production of Who's Afraid of Virginia Woolf? puts the audience right in the middle of the action. In a studio space so intimate that anyone on front row would have to say "excuse me" to the actors in order to go to the toilet, Edward Albee's black comedy about a middle aged couple's faltering marriage makes for gripping if uncomfortable viewing.

Now recognised first and foremost as an actor, Matthew Kelly impresses as George, embittered History professor at an East Coast university whose wife Martha is also the daughter of the university president. One night they receive a visit from a young Biology teacher and his wife, and as an alcoholic mist descends over the course of the play we watch helplessly as they all tear chunks out of each other. The emotional baggage of George and Martha's relationship is reflected by the cluttered set, a convincing 1960s academic's living room/study complete with jazz records, modern art, Life magazine, and of course drinks cabinet. This is a show with a serious liquor habit, and at three hours long, by the second interval the audience too is rushing to the bar for a stiff drink.

Best of all is Tracey Childs' Martha. Though predatory she is mischievous rather than vindictive, struggling to flaunt her sophistication and poise in the face of George's attempts to drag her down into a mire of self-hatred. The younger couple are no match for these war veterans, though Louise Kempton manages to bring pathos to Honey, a part which can seem two-dimensionally imbecilic. It's true that Kelly's American accent lapses into Lancastrian once or twice, though this would barely be noticeable if Childs' dialect wasn't so flawless. Relishing Albee's plentiful zingers, both bring much-needed warmth to this most unflinching dissection of human relationships.

'Who's Afraid of Virginia Woolf' continues at Trafalgar Studios until May 2.