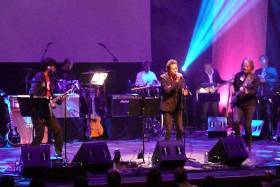 As part of La Linea the London Latin Music festival, Tuesday night saw the Barbican taken over by a Latin carnival with a uniquely British twist. “Spanish Bombs: Tropical Tribute to The Clash” saw some of the biggest stars from the Latin music scene take on some of the best loved songs by the punk icons.

Jonaz of Mexican rockers Plastilina Mosh kicked the evening off with an accordion heavy rendition of “London Calling” (sounding disconcertingly like gypsy punks Gogol Bordello) with French reggae star Sergent Garcia keeping the pace going with his take on “Rock The Casbah”.

Mexican Americana superstar Alejandro Escovedo lowers the tempo with an acoustic version of “Straight to Hell”. After rocking versions of “Train In Vain” and “Pressure Drop”, he didn’t let the fact that it was a Clash tribute night stop him plugging his latest album with a performance of the Sid and Nancy referencing “Chelsea Hotel '78"...

Cafe Tacuba’s Ruben Albarran is next and livens things up with chaotic renditions of “I Fought the Law” and “Complete Control”, but it’s up to Blanquito Man of New York ska band King Changó to really get the party started with people dancing in the aisles to “Washington Bullets” and “The Magnificent Seven”.

The glamorous Moyenei brings us a reggaeton version of “The Call Up” before Radio 3 World Music Award winner Amparo Sanchez wraps up the night with frenetic versions of “Spanish Bombs” and “Police On My Back”.

As an encore, Blanquito Man is back leading the entire line-up through an extended version of “Radio Clash”, and by now the carnival spirit is in full swing and you feel the party could have gone on all night.