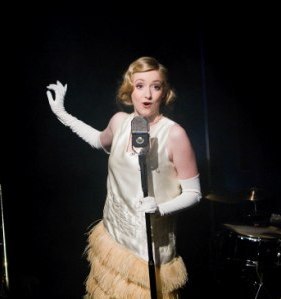 There is clearly some contemporary relevance to Stephen Sondheim's Saturday Night. Indeed the pull quotes include one from an overexcited Bloomberg's critic who takes this production (at the Arts Theatre, until 11 April) as a timely comment on the financial crisis ("a remarkable portent of things to come ... for the financial sector"). True, the story of Gene, a Wall Street runner who loses his friends' money on a dodgy stock market tip, holds a cautionary lesson for amateur investors. But Sondheim's musical, based on a play by Julius and Philip Epstein, is really about community spirit and that's something London always needs more of.

Sadly though, something must have been lost in the West End transfer of Tom Littler's production from the Jermyn Street Theatre, where Saturday Night opened last month to general critical approval. Maybe in a smaller setting the largely capable young cast (including Helena Blackman, most famously seen frustrating the Lord's wishes on How Do You Solve a Problem Like Maria?) found it easier to connect with the audience, or their device of having them play their own instruments created an intimate D-I-Y atmosphere. But at the Arts - tonight fridge-cold despite the unseasonably mild weather - the results are awkward. As the luckless Gene, David Ricardo-Pearce is graceful and charismatic, but sometimes lacking support can't hold together the action on his own.

It doesn't help that it's not exactly Sondheim's at the height of his powers. Planned as his first Broadway musical, the original 1955 production of Saturday Night was cancelled owing to the death of the producer. It wasn't resurrected until the late 90s and it's not difficult to understand why. Aside from a couple of rousing ensemble numbers like 'That Kind of a Neighborhood', the songs are merely pleasant and functional, and reminders of Sondheim's reputation for lyrical inventiveness are in short supply. There are too few laughs for a show advertised as a comedy, and though the tone turns darker in the second act, the twist ending is pure Hollywood. Littler deserves credit for attempting to rejuvenate a lost show, but apart from the simplistic moral lessons and a couple of hummable tunes there isn't a great deal to take away.