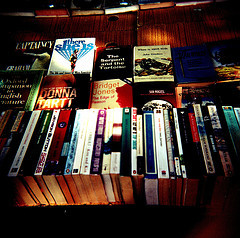 Image by microabi
At a time when the future of printed media looks ever imperiled, a Charing Cross bookshop has taken a gamble on a device that suggests there's life yet in paper and glue. The Espresso Book Machine, unveiled this week by Blackwells, is capable of printing and binding a book on-demand, while the customer waits.

Drawing on a stock of 500,000 titles — the majority of them out-of-copyright, though Blackwells are looking at adding copyrighted material to the catalogue — the machine, which looks like it was rescued from the Xerox product demo lab, is capable of churning out 100 pages per minute, chopping them up, and spitting out the resulting tome within five minutes (as shown in this video). The machine cost Blackwells £150,000, but the chain believes they'll recoup costs within the year, and are already hoping to roll it out in other branches.

Developer On Demand Books claim that the machine is the biggest development in printing since Gutenberg started tooling around with movable type in the 15th century, and they believe that it's the long-awaited instrument with which bookshops can compete with Amazon. However, speaking of the online retailer: earlier this year it released its own game-changer, the second edition of its Kindle e-reader, which has already proved a popular seller and could potentially do to books what the iPod did to CDs. While the Kindle is aimed at shifting electronic copies of modern texts, it can also access copyrighted material, and such a digital device, capable of storing thousands of texts, is seen by many as a preferable alternative to paper. The Espresso could find itself the literary equivalent of the Minidisc: an admirable technology that simply arrived too late to achieve its full potential.

That Blackwells are trying something novel is to be encouraged, and as fans of London's bookshops, we'll be interested to see how popular the machine proves.