Museum Of The Month: The Horniman

By paulcox Last edited 133 months ago
paulcox Museum Of The Month: The Horniman 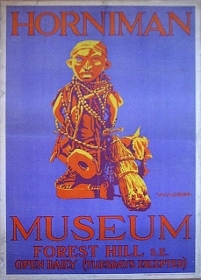 1930s poster from the collection of the Horniman Library
London is so well endowed with museums that it's been known to reduce tourists to gibbering despair. Fortunately, we who live here can take our time and seek out some of the real beauties beyond the big names. Each month, Londonist will choose a favourite to explore, sharing some surprises from the galleries and a bit of behind-the-scenes info.

Frederick John Horniman was a tea man; in 1891 his business was considered the largest in the world. Tea traders have long been some of the most worldly of men, and from the 1860s on Mr. Horniman caught a major collecting bug. Not looking to simply decorate his drawing room with the trophies of his travels, the great man had ambitions of bringing the world to Forest Hills. With far-sighted recognition of London's multicultural future, he opened his house as a free museum to introduce Londoners to the planet in all its increasingly relevant variety. When his wife insisted that the collection had outgrown the house and one of them would have to go (we like to imagine the ultimatum as "it's either me or the walrus"), he commissioned a monumental Arts and Crafts-style building which opened in 1901 and immediately donated the museum and its contents to London County Council.

The museum's collections have since grown tenfold — with the vast majority now held in an undisclosed warehouse location somewhere in Greenwich — but its faithfulness to its founder's vision shows the extent to which Horniman prefigured the modern museum. While the likes of the British Museum have had to undergo regular bouts of post-colonial soul searching, the Horniman's original role of bridging cultures and making the global local has really come into its own. The collection of musical instruments, which continues to expand into its kaleidoscopic gallery, is a perfect example: an inspiring cross-cultural survey in which threads of common form and function lead to every corner of the human family.

What is charmingly old-fashioned is the odd mix of topics covered, with one wing dedicated to the (stuffed and mounted) animal world, one to human artefacts, and a delightful aquarium in the basement. The museum doesn't try for completeness in any one area, but instead reflects the whims of its founder, indiscriminate of nature and culture. It's this hodgepodge approach that endears the Horniman to so many Londoners.

But it's an injustice to see the museum as just a cabinet of curiosities. The new Keeper of Anthropology, Wayne Modest, spoke with us and proved that the museum still takes seriously its mission to reveal the commonalities of human experience. Wayne previously worked as Director of the Museums of History and Ethnography at the Institute of Jamaica, where he explored the role of museums as spaces where all the scattered history of a people can come together. Among the communities of present day London, these cultural trails seem too numerous to count, let alone represent in one building. This is where the Horniman's eclecticism comes in handy, Wayne says: the curatorial team are free to design exhibits of greatest relevance and resonance. Current temporary displays include Wycinanki: The art of Polish paper cuts, opening involvement with the Polish Community Centre, and China: Symbols in Silk, featuring a collaborative installation by neighbouring Chinese communities. It seems the Horniman is as determined as ever to bring the world to south London, even more so now that the world is already here.

Stay tuned for highlights from the Horniman through March. For visiting information see the museum's website.