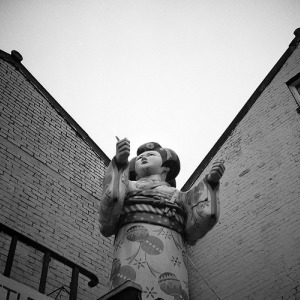 Image by D I C K S D A I L Y from the Londonist Flickr pool
Weep, market lovers, for the passing of the Greenwich Village Market. No, not the covered market by the Cutty Sark; the quirky, larger market that had vintage clothes stalls, interesting art and bizarre antiques. No more geisha girl leading the way to the bottle shop. No more hours spent flicking through old map reproductions. We always felt Greenwich Village Market was South London's equivalent to Camden, except less full of teenage goths, less commercialised and with room to swing a kitten, at least.

But this weekend marks its end. Originally earmarked for (yet another) housing development which has now fallen through, the landowners have still given the shops and stalls notice to quit. We're not the only ones sad about it - The Greenwich Phantom is bereft and Andrew Gilligan is foaming at the mouth - and the lack of anything to replace the market only makes its closure more senseless. The University of Greenwich have reportedly shown interest and there are suggestions that Greenwich Covered Market could move there during its own redevelopment works, but at present it seems the Stockwell Street site is destined to remain a wasteland.

At least Brixton Market has been (temporarily?) saved from the same developer that's closing Camden Passage. A small ray of light in an otherwise gloomy era for non-homogeneous shopping.