From The Horniman: BBB♭ Tuba 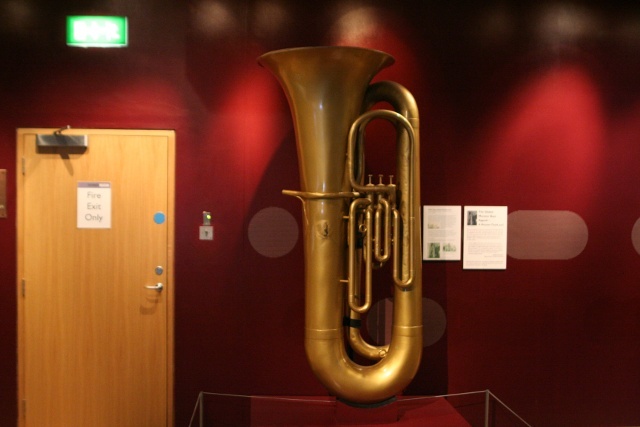 This early 20th century monster bass is a noticeable new fixture of the Horniman's Music Gallery. Though fully playable down to 29.14 Hz (or BBB♭, the second lowest note on a modern piano) it hasn't seen much musical use, having served first as the shop sign of Besson & Co., 198 Euston Road, and in 1948 followed the company to the Boosey & Hawkes factory in Edgware. Weathering surprisingly well after sitting above front doors for the better part of a century, it lost its plinth when the factory folded in 2001 and went on loan to the Horniman for a 2006 exhibit on the formidable legacy of Boosey & Hawkes. It was thereafter the subject of an appeal which successfully raised £10,000 allowing the museum to purchase the instrument. It's now the largest item in the UK's biggest collection of over 8,000 musical instruments spanning the music-making traditions of the entire world.