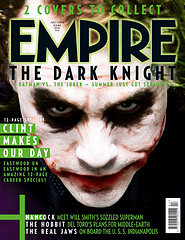 Image by NiJoKeR
There Will Be Blood, Gomorrah, In Bruges and No Country For Old Men are just three of the great films that readers of Empire didn't vote for at their star-studded awards bash over the weekend. While 2008 provided some truly great works of cinematic art, the long-running mag's readership seemingly didn't notice, and voted instead for the sequel of a reboot of a franchise of a (pretty damned funny) 60s TV show to walk away with the rump of the gongs.

In a blow against Empire readers' ability to understand basic concepts, Gemma Arterton, two years after her big break in St Trinian's, was named "Best Newcomer" — an award she'd been nominated for two times already. Does anybody have a dictionary on them?

There's a picture gallery here from the show, while a full list of winners can be found here.