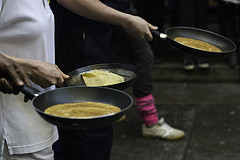 Image courtesy of pfig from the Londonist Flickr pool
It's pancake day on Tuesday! Drool... So we thought we'd give you a heads up on the lovely events that are happening on the day - and before...London Farmers' Markets are holding Pancakealympics heats in Blackheath and Islington on Sunday, before the final on Islington Green on Tuesday. There's an entry charge of 50p that will go to charity.

If you feel like eating, rather than racing, pancakes, there's plenty for you as well. You can buy the delicious batter treats at many races or you can go to the Water Poet after the Spitalfields race and chow down on a number of fillings. If you want more delicate crêpes, Covent Garden's Crème de la Crêpe is hosting Crêperama from 6pm, searching for the best crêpe creator in London. The winner gets free crêpes for a year, which isn't to be sniffed at.

And finally, if you want pancakes for free then you'd best get to Ed's Diner on Rupert Street between 8am-1pm, where the Kindess Offensive are handing out pancakes and tea and coffee gratis. They're also giving pancakes to Great Ormond Street and other charities across London. How great is that?