Pretty much an average week musically this week, with lots of quality stuff to be found. 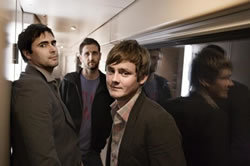 Keane
Of the big gigs, The Cribs play Heaven and The Fray play Scala on Tuesday, whilst The View play Koko. Tickets are sold out for Cribs and Fray, but View tickets are £15.60 each.

Meanwhile, Lordi (remember them? 2006's Eurovision winners, Finnish heavy metallers) continue their downward spiral to obscurity by playing the Islington Academy on Thursday. Tickets are £15 each. If you like something a bit calmer, then Robyn Hitchcock and his friends play Union Chapel that same evening - tickets are £15 each to see the singer songwriter / folk guitarist.