A bit of a strange week coming up musically in London. Plenty going on, however they're all at the smaller end of the market, so making good suggestions is very much down to personal taste. Here's what we'd get up to this week. 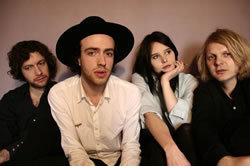 The Veils
Like your music a bit more strange and left of centre? then U.S. Girls play Upset The Rythm at the Old Blue Last on Monday. Sometimes haunting, sometimes colourful and psychadelic and sometimes just plain weird, they might brighten up an otherwise dreary February evening. Tickets are £6 each.

New Zealand indie kids The Veils play the Brixton Windmill on Wednesday night. Combining the likes of Jeff Buckley, The Birthday Party, The Smiths and Joy Division all in one big melting pot with some accents from the other side of the world, it will be a pretty good Wednesday night from the sounds of things. Support comes from the wonderful Alessi's Ark. Tickets are £5 each.

Recently announced to be supporting Funeral for a Friend, We Are The Ocean will play ULU on Friday night. They're a five piece "post-hardcore" band, so expect lots of energy, screaming teenage girls and lots of guitars. Interested? Tickets are £8.81 each. Not interested? Well, we don't blame you, but we like to try and be all inclusive.

If you want something that's free, Innerpartysystem (who do much the same sort of stuff as We Are The Ocean, but with more electronics) play the Apple Store, also Friday night. We believe it's a simple queue-up-and-hope-you-get-in, though it is also a "stripped back" set. They're on at 7:30.