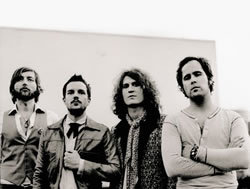 Meanwhile, after the NME tour finished at Brixton Academy on Saturday night, their shows continue throughout the week, with Wombats playing Shepherds Bush Empire on Monday (tickets are £18.22), and Metronomy playing Koko on Tuesday (tickets £12.34). Then Wednesday night sees the awards ceremony at Brixton Academy (featuring Franz Ferdinand amongst others), and then Thursday night head down to the O2 to catch The Cure, Franz again, White Lies and Crystal Castles (tickets are £29.36 each).

Elsewhere, there are plenty of ace bands playing all week, however a lot of the shows we'd reccomend are sold out (School of Seven Bells, Hockey and Pasion Pit). However we'd strongly suggest you check out Wichita Records' new signing First Aid Kit at the Camden Enterprise on Monday - tickets are £5 each.

Alternatively, Friday night sees indie kids Goodbooks play the Barfly (tickets £6), and if you want a nice relax to some gentle folky tunes then check out Emmy The Great at ULU (tickets £9.50 each)