A mixed bag musically this week - not many huge acts playing (well, unless you are fortunate enough to have Brits tickets for Wednesday night), but plenty of quality other acts a bit down the scale. 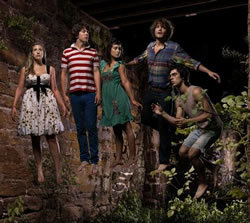 Ra Ra Riot
Chicago punk rockers Alkaline Trio play two nights at Koko on Monday and Tuesday nights if you like your music a bit louder and upbeat than some. Tickets are £17.62 each.

If you liked one of 2008's biggest breakthrough acts, Vampire Weekend, you'll love Ra Ra Riot who play Kings College on Tuesday night - tickets are £8 each. Think US indie rock, but a bit more exotic and fun.

If indie is your sort of thing, then why not make it a double header and catch Mongrel on Wednesday night at Scala. The British indie supergroup features the likes of Jon McClure (from Reverend and The Makers), Low-key, Andy Nicholson (Ex Arctic Monkeys), Matt Helders (Arctic Monkeys), Drew McConnell (Babyshambles), Joe Moskow (Reverend and The Makers). Tickets are still available at £9.79 each (it appears that people do still have taste).

Want a dance? Like something hotly tipped and quite fun? Then Tommy Sparks is your man on Thursday night at the Lexington.

To round out the week, Fierce Panda take over Scala on Friday night to celebrate their 15th birthday. Catch the likes of The Walkmen amongst a range of DJs at the Kings Cross Venue. The birthday celebrations continue until 3am and cost £15 to get into.