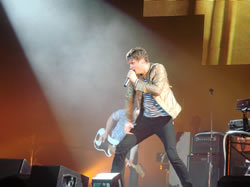 Keane's Tom Chaplin at London's O2
“Music for Bedwetters” the legendary Alan McGee christened Keane. The Creation Records founder is usually right about most things, however he seems to have got Keane’s audience completely wrong. At the first of two sold out nights at London’s vast O2 Arena last night, everyone from grannies to teenagers to toddlers were present.

As front man Tom Chaplin commented, their first gigs were in venues smaller than their B-Stage on this tour, and his stage personality has certainly grown with the stages they’ve filled. Playing such big arenas on this tour has seen Tom go from a decent stage presence to a full-blown Bono impression, short of the preaching about the 3rd world.

Opening up the evening, we finally got a chance to catch the hotly tipped Frankmusik. He took over the arena’s stage like it was his own, taking his beatboxing, electro dance tunes a la old style Moby mixed with Calvin Harris to the masses and converting the hoards with the catchy hooks and recognisable samples.

Once the stage was set for Keane, they burst out, triumphantly opening with “Lovers are Losing”, they pleased everyone, playing the classics (Somewhere Only We Know, Everything’s Changing), the current chart hits (Perfect Symmetry, Spiralling) the fan favourite rarities (Sunshine, Snowed Under) and the obligatory new ones. 22 songs in 105 minutes isn’t bad pace for a well seasoned band, let alone some East Sussex kids who were unknown just five years ago.

Starting off the evening slowly, the light display was modest however as things progressed, the national grid was tested to the limits, with Again and Again featuring some computer game graphics on the huge screen behind the band, and A Bad Dream a rather haunting video of war-era dancing in gas masks. The production values were distinctly ramped up, with a B stage inviting a return to their early days, playing to an almost empty room at the Hope and Anchor in north London. Tunes like “Snowed Under” offered a chance to go back to basics.

Coming to the end of the tour, Tom’s voice wasn’t at its best; however this inevitably led to the mass yell-along to “Somewhere Only We Know” towards the end of the evening. Croaky, he took a break to let the crowd do what they do best: “Angels” for the bed-wetting generation, if you will.

Closing out with the usual mass-hug-along of “Bedshapped”, it was sadly time to go home. Whatever you may think of the Battle three piece, they sure know how to put on a good show and have some great pop tunes. Granted, they’re no Arcade Fire or other critics current hype band, but they do what they do best: make great tunes for the mainstream.