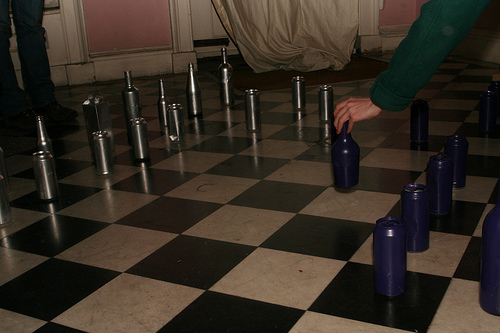 Chess in the foyer sounds grand, my dear.

Temporary School of Thought are the ad hoc group of artists better known to the media at the moment as the £22 million squatters. Like many legendary squatters, they have become popularly defined by the market value of the empty property they occupy, a Georgian mansion in the heart of Mayfair. The occupants however couldn't care less about the hypothetical price of their Grade II*-listed home. After more than a month in residence, and with the company that owns the building buying them further time with a bungled court case, the collective have been putting the vast space to work.

What do you do with five floors of long-abandoned Mayfair luxury, complete with hand painted Chinese wallpaper and a warren of servants' quarters? Tidy the place up, for starters. Then launch your own school. In its first week of ephemeral existence, the Temporary School of Thought has run on a packed timetable of open events, covering subjects from cooking and dance to Polish history and traditional French book binding.

Londonist dropped in on Sunday, the final evening of week 1. No half-term exams to be seen, but there was plenty going on. The grand residence has its frontage on Charles Street, just off Berkeley Square, but we pupils entered like tradesmen from 39A Clarges Mews. We passed piano recitals and juggling practice to reach the main foyer with its sweeping staircase. Following an oddly appropriate screening of Brazil in the cinema, a scholar-in-residence lectured on online gaming and the possibility of virtual utopias, sparking a lively debate that carried on into dinner. This was shared around a long table as at any good school. Soup and salad were prepared in the ample kitchen from crates of vegetables collected early in the morning at New Covent Garden Market. After the shared repast, tonight was games night: while a planned all-nighter of Risk in the drawing room never quite came together, we did tackle Scrabble before joining a supremely satisfying game of Murder In The Dark on the still-unused second floor.

Over the course of the evening, students became teachers, and enough visitors signed on to lead workshops in their fields of expertise to carry the school forward for weeks to come. Whether the courts will allow it is another matter, so pay a visit while it's there. Classes recommence this evening; check the website for a new timetable some time today.

Photo by Amanda Farah. Watch this space for a full gallery later in the week.