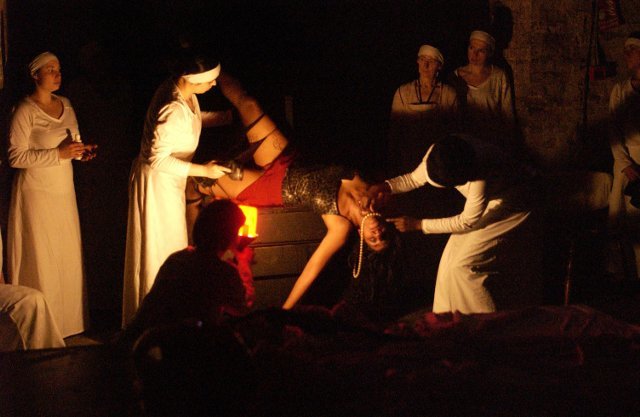 At its official world première after two years in gestation, Brazilian-British collaboration Hotel Medea is about as far as one can get from an ordinary night at the theatre. The performance by Zecora Ura and the Urban Dolls Project announces itself with an unapologetic challenge: its duration. Spanning six hours from midnight to dawn inside Dalston's Arcola Theatre, it's an unbroken trilogy in one long, long night.

The experiences that fill the witching hours are kept shrouded in mystery and stoked with anticipation. The website promises from Part I a market, a wedding, a battle, a maze, and the live rhythms of Recife's DJ Dolores; on the remaining two performances even fewer clues are granted. This is a maze through which the audience must find our own way.

The source material, at least, is well established, the myths of Jason the Argonaut's betrayed, child-murdering wife as covered in tragic form by Euripides and Seneca. First appearances (illicit carnivals, riot gear, a football match) mask how close we still are to these ancients. As far as the production may strike out into narrative possibility, and as often as it may blur classical Corinth into Amazonian fantasies and tabloid Britain, the basic undertaking remains that of tragic theatre: to generate catharsis; to grab the audience by the throat.

While taking themes and aims from Greek theatre, Hotel Medea looks to even older forms of ritual practice for its tools. It's doubtful whether the six hour duration would be tenable by narrative theatre alone, but such spans of time are familiar to the world of ritual, from Hindu weddings to Easter vigils to West African initiation ordeals. Indeed, seemingly interminable duration can itself be a tool for the cultivation of ritual space, a power few theatrical companies would have the courage to explore. These collaborators understand it, however, as they understand the personal struggle of self against the night running alongside every act of the performance. "By choosing to stay awake," they encourage us, "we insist on life and resist death."

If this choice feels like a heroic feat to the audience member stumbling out into the grey Dalston morning, it's hard to comprehend the dedication of the actors, who keep up an energy akin to shamanistic fervour throughout the night. Medea's performance is superhuman, painful to watch, granting catharsis as tangible as an arrow to the heart. Jason is simply a perfect asshole, golden fleece in one hand and mobile phone in the other.

Our relations to the characters cannot long remain as simple as judgement. In the way that animist rituals dissolve boundaries between the self and environment, the performers use similar tools to forcefully break down our separation from the performance, seeking nothing short of genuine transformation. It's exhilarating but most definitely unsettling, as this is just the sort of entanglement with primitive forces that the trilogy warns us about. If like Jason, and like the modern world he embodies, we use and abuse these forces, our fate is sealed. There is one point that this night makes unforgettably clear: that we are all Medea's children.