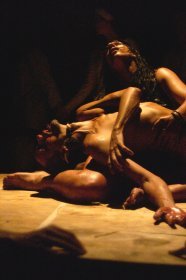 It's not quite as easy to capture the imaginations of a modern audience with Greek tragedy as it was at the old Dionysia festival, but when it works, it works. This season, Dalston's Arcola Theatre seem keen to bring a whole new spirit to the classics by way of emotionally powerful contemporary Brazilian performance. After witnessing the capoeira-powered In Blood: The Bacchae earlier this month, we're steeling ourselves to delve much deeper into veins of myth with Hotel Medea.

The minds behind Hotel Medea — Zecora Ura and the Urban Dolls Project — are relying on the resonance of Greek theatre as shared ritual to draw the audience far into the show. The story of Jason the Argonaut's jilted wife will be in parts a promenade performance, in parts dispersed via video and mobile phone, and in parts practically dissolve into a party, with famed Brazilian DJ Dolores mixing live music on the opening weekend. Ultimately, it will finish with breakfast.

The mention of breakfast should be a warning bell if you like your plays short and sweet. Hotel Medea, a trilogy in full, will be staged from midnight to six in the morning, allowing ample time for audience and performers to lose themselves entirely in its world. Given this breadth, we can't blame the companies for limiting the trilogy — after two years of development — to a run of nine nights between 29 January and 14 February. While you might feel some trepidation about just what you've booked yourself in for, it's not an event to pass up lightly. There are discounted tickets available for Part I alone, allowing for a more reasonable bedtime, but surely you're not that much of a quitter. In for a drachma in for a talent, we say.