It seems London's music scene is finally waking up from the Christmas slumber, with a range of rather special gigs this week. 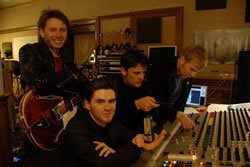 If you're like us and on a hunt for some great new music, maybe wander down to HMV Oxford Street on Tuesday evening to catch White Lies do a free instore set at 6pm. Think Editors, but a bit more uplifting. We'd also reccomend Roses Kings Castles, A Babyshambles' side project from their drummer, the excellent Adam Ficek. He plays the 12 bar on Wednesday night.

Other than that, there are a lot of up-and-coming bands playing around at some smaller venues, so why not go back to basics, and get down and dirty at a venue like Water Rats in Kings Cross or The Luminaire in Kilburn.

Catching something good this week that we haven't mentioned? Pop it in the comments below and tell us all about it.