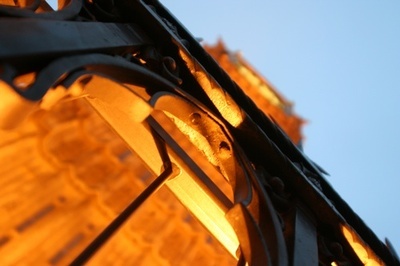 Everyone saw the fireworks last night - either you were stood in the deep-freeze, snug on the sofa on the TV screen or you simply went to bed and caught up with it today on the glorious interweb.

Amid the tumultuous bright lights, clouds of gunpowder* and crashing bangs stood the Clock Tower of the Palace of Westminster, erroneously known around the world as Big Ben. Visitors flock to London every day of the year, and top of the wishlist for every eagerly-snapping tourist is to get a shot of the tower above Parliament.

As any slight geek (or pub quiz afficionado) will know, Big Ben was actually the nickname given to the Great Bell inside the tower, not the tower itself. The Great Bell is connected to the Great Clock (was everything called the Great Something-or-other in the 19th century?). The tower itself was completed in early 1859, about five years late (maybe this was why it wasn't called the Great Tower?). The Great Clock began ticking in May of that year and the bongs chimed from July.

So this year marks the 150th anniversary of the tower, the clock and the bell. The Parliamentary authorities have had a Great Stab (sorry) at writing up the event here, including an events calendar setting out planned celebrations. As most people will never get the chance to scale the tower's 393 steps, there's also a really nifty graphic virtual tour - and a link to a Youtube video podcast.

So on 31 December 2009 when you're crammed in with 180,000 people on the freezing banks of the Thames, you can regale your mates with a shedload of useless information about the amazing tower that still dominates the skyline. They'll love you for it (although they'd presumably prefer some nice warm gloves and a hot chocolate from you, most likely).

*gunpowder also plays a rather important part in Parliament's history in 1605, but that's another story for a Londonist post in early November, we reckon.

Image is author's own