The Following Roman Candle Is Brought To You By... 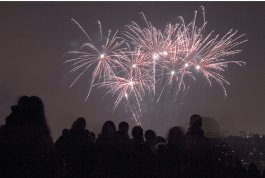 Corporate sponsorship, dontcha just love it! Especially when it's our blessed local government handing over the prestige of a treasured annual event for a spot of cash.

Electronics firm LG have paid a certain sum of money to be the first ever sponsor of London's New Year's Eve fireworks display over the River Thames. The canny South Korean company, fearing a consumer backlash if their branding were too strong, have opted for a more subtle way of getting their corporate identity across: the company's colour scheme (red and white - what, you didn't know?) will be featured prominently in the display, while thousands of signs directing visitors to the display will be emblazoned with the LG logo. Oh, and that same logo will also be beamed onto a "prominent building" throughout the evening. Unless Gail Porter's somehow involved, we doubt it'll be the Houses of Parliament.

According to LG's marketing director in the UK, the company wishes to embrace the spirit of hope that a new year brings - particularly a new year as grimly anticipated as 2009, where flashy white goods may be seen as a luxury few families can afford. The firm hopes tto overreach such concerns, and expects that revelers "will see LG logos as they arrive and connect the red and white fireworks with LG's colors". Which to us makes the unfortunate mental connection between LG products and dangerous explosions, but then what do we know about marketing anyway? Certainly not enough to question the value of forking our for a display seen by no more than 180,000 people over paying for a TV ad.

More information about the New Year's Eve show can be found here.