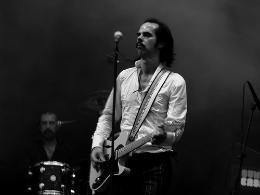 'We'll play this next song, and then we'll do requests', Nick Cave tells the audience in the art-deco Troxy, 'as long as they're on the list. And in the right order.'

Such is the added bonus of seeing the snake-hipped, immaculately-tailored musician live - not only will you be involved in a stage show that can't fail to blast you out of oblivion, but you also get to experience Cave's deadpan wit and constant attention. This performance element is also there in the hip grinding movements and the dirty, bluesy rock. Handle-bar moustache, tightly clinging trousers and shirt opened low to reveal a jangling medley of metal, Cave is at once rock god and the thinking woman's Tom Jones, thus proving two important facts: age doesn't mean you can't rock, and the amount of hair coming off the side of your head is more important than that on the top.

It's lovely to see the interaction between him and the rest of the band, many who have been playing together for ten years or so and counting. They dance, sweat, giggle and grin at each other, looking more like a tight uni rock band than ageing musicians. The Dirty Three's Warren Ellis, troglodyte-cum-virtuoso, can't go without a mention. The set reflects the best of the band - the heart-trembling melody of 'Straight to You', the pounding 'Deanna', the grinding dark of 'Tupelo' and the uplifting 'Nature Boy'. Cave's ability to poeticise about the world around him comes through in the richness of his subjects, reflections and stories - he is at once a litany of colourful characters, sex, love, what you win and what you lose.

You know when you've been expending time watching substandard tele or reading crap journalism, then you come across creativity that feels like a gift? It reminds you that it's silly to turn on Cash in the Attic when there is The Wire; to pick up a copy of Heat magazine when you can read the Guardian; to listen to the chart show when you can put on your dad's copy of a Talking Heads classic. After all, there is so much more that the world has to offer.