Off With His Head 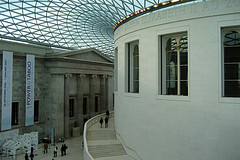 Egyptian authorities have taken possession of a 3,500-year old sculpture of a Pharaoh's head, nearly 20 years after it was spirited out of Egypt by the grubby mitts of a notorious London antiques dealer.

In 1990, thrillingly-named varmint Jonathan Tokeley-Parry came into possession of the head, which depicts Amenhotep III, who died in 1375. In order to smuggle it out of the country, he disguised it as a tacky souvenir by dipping it in plastic and painting it black, thus hiding its dignified provenance. The artifact was then shunted mercilessly from country to country like a Ryanair stewardess.

Despite Tokeley-Parry's fiendish ways, the authorities (possibly working on a tip-off from Indiana Jones) busted his game wide open when an assistant tried to sell stolen papyrus texts to the British Museum, and he was jailed in 1997 for three years. Since then, the two countries have churned through the legalities of the sculpture's return, and it was handed over to the country's embassy this past weekend, from whence it shall be returned to the Middle East.

Good to see that two countries can collaborate on such a delicate matter as returning antiquities to their rightful owners. Now, about those Elgin Parthenon marbles...

Photo of British Museum by wallyg via the Londonist Flickrpool