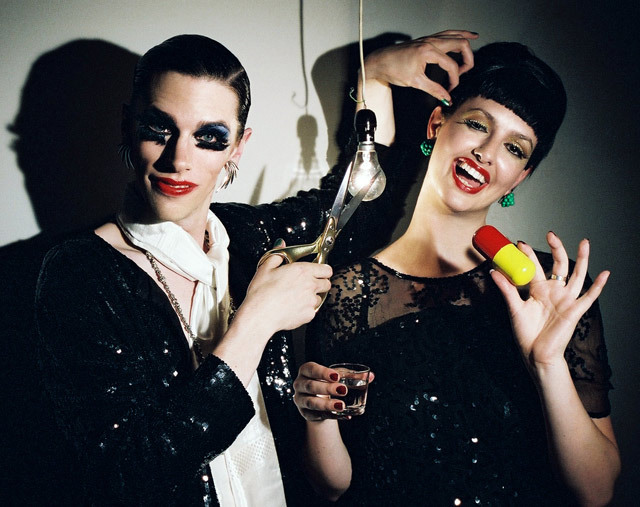 We witnessed the devastating glamour, glory and grot of Georgeois Bourgeois & Maurice Maurice at GSK Contemporary late night cabaret at the Royal Academy not long ago and we just had to share them with you. Words failed us, so fortunately, they've got some great ones themselves:

Visionaries and victims of the 21st century hype-machine that is life, Bourgeois & Maurice are your transient musical guides through the Savage Garden of pop culture. Designed to provide solace through others’ misfortunes, and hope through brutal advice, Bourgeois & Maurice pave the way to a better future for all of the young hopefuls, wayward wanderers and apathetic assholes who wander into the spider’s web of modern life.

So, tell us how it all began.

B: We met about 6 years ago, although Maurice doesn’t remember it, at a group therapy session. She was going through a particularly bad time I think, which may be why she’s blocked it out, but I distinctly recall it because I took an instant disliking to her and we argued for the entire hour. A lot of people complained about us afterwards and said they wanted their money back but I think we gave them a much better show than the wet drip with the linen trousers forcing us to cleanse our chakras and nurture our inner lotus flower.

M: Yes we met at a time at which we were both in desperate need of help, so we sucked that out of each other, and now pass our resentment and superficial-understanding onto the audience.

Apart from foie gras and Stella Artois, what else rhymes with Bourgeois?

B: Well Georgeois, which also happens to be my name. Pure stroke of coincidence on my mother’s part and definitely not a hastily self-contrived pseudonym.

What would be your fantasy venue to play?

B: I want to play on that volcano set in Showgirls and be lowered from a ceiling on a wire. I would also like to push Maurice down the stairs whilst wearing a diamante swimming costume but I’d settle for just the volcano set.

M: Butlins. Always been a fan and I think we’d go down really well with the families. But if not there I’d quite like to do something in a really remote castle, where the audience move rooms as often as Bourgeois changes costume. That would be splendid.

What's the best thing about your RA residency?

I think our RA residency has given us a chance to play to an audience that might not ordinarily come to see the sort of thing we do – we’re performing as part of GSK Contemporary, which is a big exhibition of Contemporary art, and I think we’re probably the only ‘exhibit’ which actually comes out and starts talking directly at you, so there have been a few alarmed faces initially but they soon seem to appreciate the fact that we don’t come with ‘Do Not Touch’ signs. It’s also fun singing ‘Don’t Go To Art School’ to a room of artists and art-lovers – that one seems to get the rowdiest cheer!

Who would be in your fantasy audience?

B: I absolutely hate speaking to people I know in the audience so my fantasy audience would probably be packed full of total strangers all off their heads on Nitrous Oxide so they laugh at absolutely everything we say and do. I might save one seat for Klaus Nomi because there are few things I’d like to ask him after the show.

M: The Queen. That would be amazing, and a sign that the world had finally gone utterly mad.

What subjects would you NOT sing about, considering the breadth of subjects in your current show?

B: We’ve yet to discover that – so far we’ve managed to avoid any sort of moral dilemmas when it comes to trawling the depths of humanity. There’s a lot of ground to cover, and if you believe those left-wing broadsheet headlines – only a matter of months to do it in before total global meltdown. Fun times.

M: Yes, it’s very hard to say as we don’t ever write songs by saying ‘let’s write about this subject’, it’s not a overly conscious decision- the subject just ends up being the subject, and who knows what bizarre acts humans will do next. So far nothing is out of reach.

Can we buy your music and where can we see your show?

We’re recording an album at the moment, which will be available next spring. You can listen to tracks online for the time being. And you can see us live at the Royal Academy of Arts every Monday until December 29th, also at the Royal Court Theatre bar every Friday in December, and in March next year we will be performing our new show ‘Social Work’ at Soho Theatre, which is very exciting and will probably change the world in some small way – no guarantees, exchanges or refunds.

Who makes your fabulous costumes and who designs them?

B: A young genius called Julian Smith is our stylebible. He’s made some truly amazing stuff for us, including a gold and green number for me which in his words is ‘Henry VIII meets The Supremes’. I’ve never come so close to crying tears of joy as when I saw that on his mannequin. Other bits we collect from various random holes around the country (top tip: there’s an amazing Red Cross shop in the middle of the countryside in Limoges, France, where they literally stack the clothes in mountains and let the fashion-hungry animals tear through them. I discovered it this summer and I plan to make it an annual pilgrimage).

Where did you learn to do your make-up and hair?

M: Backstage with very little time and too much alcohol.

B: I stole my sister’s Make-Up Doll kit when I was about 5 years old so I’ve had a while to perfect my craft. The lashes are genetic.

Can you really not afford to live in London anymore? How else has the 'credit crunch' hit you?

B: Well actually, seriously now, we did have a trip to Moscow that was cancelled and blamed on the credit crises. I thought it was all meant to be budget-fun and free-parties in warehouses and casual sex in IKEA showrooms when the eviction notices start coming in. To tell you the truth, I’m really disappointed. It’s nothing like the 1930s (so says Maurice, I’m not old enough to remember).

M: So far the old CC has remained a thing of media obsession in my life. I’ve always been broke.

What does Christmas hold for Bourgeois & Maurice?

B: Lots and lots of gigs! We’re at the Royal Academy until the 29th December and the Royal Court until 8 Jan, plus we’re doing a show in Greece right after Christmas on the 28th. Obviously the big day itself will mainly be spent at Church – it’s just cost effective in these hard times. No heating bills, and free red wine.

Apart from "If you don't know what to do with your life... just die" and "Don't go to art school", do you have any other top tips for our readers?

B: Everything from UniQlo misshapes on first wash.

Everything you need to know about Bourgeios and Maurice is on their myspace and you can bitch with them on their facebook page.