By NeilA Last edited 168 months ago
NeilA The Saturday Strangeness 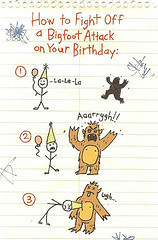 78. The Whatsit Of Wanstead Woods.

If recent rumours are anything to go by, then some strange beast is loitering around the outskirts of London. Situated within the London Borough of Redbridge, Wanstead, spliced by the A12, it is hardly the Pacific Northwest (although its open grasslands do merge with Epping Forest), but could, as the press have been quick to mention, Bigfoot be in our backyards?

The name of the suburban area means 'settlement' and 'small hill' but whatever is lurking in the shadows must surely be a case of either mistaken identity, local prankster or monster from some other plateau, indeed, a stranger in a strange land.

In the autumn of 2008, a young local fisherman was angling at Holiday Ponds, which sits on the border of Wanstead and Leytonstone, when a rustling in the undergrowth unsettled him. The man, 18-year-old Michael Kent, was strolling to the spot where his brother was perched when he was confronted by a creature he could not believe. From the shadows of the dusk emerged a black creature, around four feet in height, which slowly moved out of sight.

Michael was convinced he'd seen a bear, despite the jokes aimed at him from his brother and father, and park officials were quick to dismiss the report stating that only foxes and deer inhabited the area. However, Mr Kent was quick to quash the scepticism, telling local press that, "I've been fishing in the area since I was five years old, and I've seen deer, dogs and even a cow before but never anything like this."

Of course, until the mystery presence rears its head again, such a tale will no doubt disappear into local folklore, but we shouldn't be so quick to mock such reports, because in the early '80s a bear was said to be prowling Hackney Marshes, and two were found also decapitated in the area, so something could very well be out there, either as an escaped pet, or something even weirder.

Fishermen are often keen to talk about the one that got away, but on this occasion, I'm sure Mr Kent was happy it did!