Eco-Crime Alive And Well In London 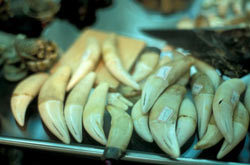 This week the Environmental Investigation Agency hosted a night of eco-crime awareness against a backdrop of artwork at the annual exhibition of the Society of Wildlife Artists. A pair of violinists elegantly serenaded patrons, supporters and campaigners who mingled and chatted while sipping wine, necking neat rectangular cut sandwiches and wishing they could afford one of the fabulous paintings or sculptures on display (we were particularly fond of the birds, bears and badgers dotted around but maybe we're just susceptible to alliteration).

In contrast to the civilised gathering, EIA’s message is that eco-crime supports a savage and lucrative black market business, ranging from million dollar shipments of ivory and banned CFC chemicals, to illegal logging and the trafficking of endangered wildlife. Eco-crime is escalating. Even though London is geographically remote from wild tigers, whale hunts and deforestation, it’s a thriving market place for illegally sourced tropical hardwood and wildlife products, innocently displayed in alternative medicine centres, antique shops, DIY stores, and bespoke rug vendors.

Andy Fisher heads up the wildlife crime unit of Operation Charm, the Metropolitan Police’s only initiative against the illegal trade in endangered species in the UK, and is passionate about his work.

We were launched in 1995 as we became aware of particular alternative medicines, such as some Chinese medicine shops selling products containing illegal ingredients extracted from tigers. We were finding sales of tiger bones, and tiger rugs, and in one case, 10 month old stuffed tiger cubs. People think it’s an international issue but it’s happening in London too… Recently we arrested someone in west London who was in possession of a huge brand new polar bear skin rug that had been made-to-order.

An effective sticker scheme has been introduced for traditional Chinese medicine traders to enable them to demonstrate their commitment not to use endangered species in their products and allow consumers to make an informed choice about what they're buying. After all, if people are unwilling to buy the products of wildlife crime, the market will dwindle. As a positive Andy Fisher says, "It’s a long and difficult process but with the help of the public we can continue to make this work.”

Find out more about the work of EIA by visiting their website.

The Society of Wildlife Artists annual exhibition is on till Sunday at the Mall Galleries. Admission just £2.50.

Image of tiger teeth on sale in Taiwan courtesy of EIA