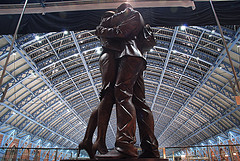 At the weekend, we gave you a heads up about furore over a controversial frieze commissioned by London and Continental Railways to adorn the base of the gargantuan "Meeting Place" statue, upstairs at St Pancras International. Designs unveiled at the station on Friday and much to the surprise of the Head of LCR, featured - among other things - the grim reaper, a commuter plummeting into the path of a train, a couple shagging up against a wall and punters giving the finger to the world at large.

Although LCR commissioned artist Julian Day to create the frieze and liaised with him on designs, head honcho, Rob Holden was not kept in the loop and has halted proress on the offending artwork, presumably apoplectic and worrying about his share price, deeming it "completely unsuitable". Day, on the other hand, is still hopeful of a way forward, saying he is "not an artist who seeks to shock".

Whilst we can understand how some people might find some of the figures in the frieze inappropriate in situ at a major international rail terminus, that hugely bland sculpture of a business couple kissing definitely needs some spunking up. A tragicomic frieze, depicting a more realistic, if nightmarish, vision of life, commuting and travel in the 21st Century at its base could go some way towards redressing the balance and injecting a bit of grit and realism into the immaculately clean and high end St Pancras complex. People do throw themselves in front of trains, there are rude people at train stations. Folks do snog energetically before parting and there are drunken tramps in residence, no matter how many Pain Quotidien's you install on your concourse. We're sorry that LCR's main man can't see beyond knee jerk reactions and obvious weigh-ins from the Samaritans and train drivers' union ASLEF and it's a shame he can't be proud of his company's vision in commissioning something with originality, edge, wit and wisdom to spice up St Pancras.

Image courtesy of ignacio izquierdo via the Londonist Flickrpool.