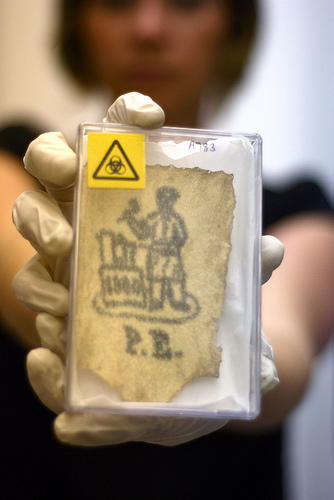 Despite the fervent wishes of the world's mothers, tattoos aren't going away. They're growing in popularity, mainstream acceptance, and even physical size, reported tattooist Lal Hardy, practising his art in front of an inquisitive audience at last night's Dana Centre event. His barmy customer for this evening may have only walked away with a tiny ice cream (no flake) on the clavicle, but there's no ignoring the current unprecedented boom of this ancient art form.

In fact, the only things disappearing these days are the old tattoos themselves, according to laser remover Sean 'Woody' Wood and dermatological surgeon Dr. Raj Mallipeddi. But increasingly, the regretfully tattooed are turning to laser removal simply to wipe out last decade's tribal sleeves in favour of this decade's Japanese sleeves.

Even though we admit to a bit of ink ourselves, given this level of enthusiasm we had to ask what the big deal was. Fortunately, Oxford's tattoo historian Jane Caplan was on hand to provide some perspective. Indelible marks in the skin have meant many things to many cultures, and the European traditions trace back long before knowledge of the Pacific Islands and the word "tattoo." The oldest sketch of a tattoo in her collection was taken from a pilgrim to the Holy Land, a strangely schematic street map of Christ's cross-burdened route through Jerusalem. And while it's easy to think that today's tattooed trendsters have less of a personal investment in their ink, there have always been shallow designs too. Caplan's collected sketches of 19th century prostitute's tattoos included a complete girdle, waist to thighs, composed of a sort of paisley of cartoon penises.

The free evening was fully booked, and the audience was a very mixed bag indeed, from a pair of Maori to London's coolest dog-collared priest. Thanks to the autumn weather, fewer actual tattoos were on display than one might have hoped, but there were no doubt a myriad lurking underneath.

It seemed that many in the audience were in fact drawn here by the event's disclaimer: human remains were to be on display. These, it turned out, were a sample from the Science Museum's Victorian tattoo collection— and when the Museum says "tattoo collection," they don't mean photographs. These leathered reminders of past folk art at its most personal were the crowning spectacles of an evening so wildly interdisciplinary that it could only have happened at the Dana Centre.

For information on some great upcoming evenings, have a look at the Dana Centre website.