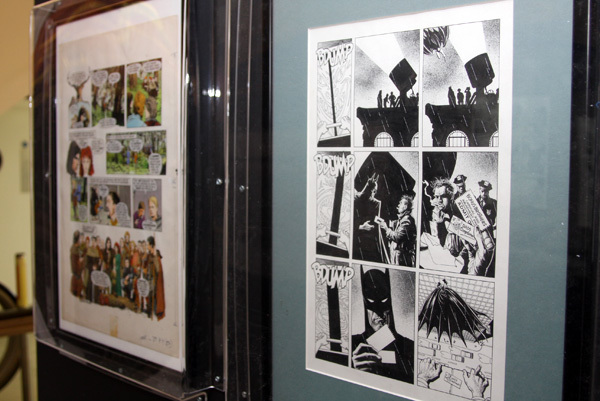 Tucked into a convenient nook beneath an elevator at Harrods, Comic Timing is a thoughtfully curated exhibition of original artwork by British comic book writers and artists. As the curators note, comic art has long been seen as a disposable medium - the "off cuts" of the industry, they were often given away or destroyed, and it is relatively recently that the fruits of the artists' labours have been seen as valuable in their own right. Indeed, some artist now live off the proceeds, and they are coveted by collectors and dedicated institutions like the DC Comic Archive and the London Cartoon Museum.

The exhibition excels in bringing together a broad collection of original work, covering various genres and eras. Perhaps of most interest to Londoners is the artwork for From Hell, Alan Moore's complex take on Jack The Ripper. Moore, one of the finest and most influential comic book writers whose work is all too often transformed into lacklustre cinema, is similarly represented by art from V For Vendetta and Watchmen, while a text-less sequence of images from The Killing Joke embodies the black heart of his Batman period far better than recent movie The Dark Knight managed. Less cerebral highlights include drawings for Dennis the Menace and Korky the Cat, while it's interesting to see a drawing from Jamie Hewlett's career-making Tank Girl, complete with Tippex-ed out bits and speech bubbles with the words cut and pasted in place.

This broad collection deserves a wider audience than the comic book fans who'll doubtless visit - it's been curated well, with helpful captions explaining the context and relevancy of the art for the non-aficionado. While championing the oft-undervalued role of British talent in graphic novels, the exhibition also highlights the paucity of original ideas in Hollywood, forced to endlessly regurgitate stories and characters from the pages of comic books.

Comic Timing is on the lower ground floor of Harrods, Knightsbridge; enter via Entrance 5 on Brompton Road, and go down the escalator. The exhibition runs until October 28th, and is free