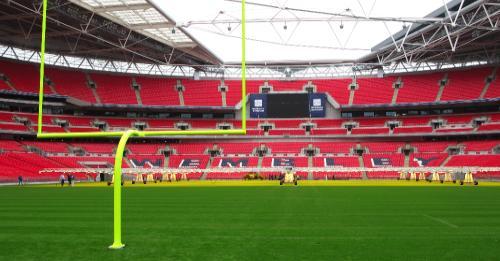 The NFL put its marker down for another London festival yesterday as gridiron posts once again adorned Wembley's turf. The man who persuaded America's premier sport to make London its European bridgehead, NFL UK's managing director Alistair Kirkwood, was there to greet both local media and those newly arrived from New Orleans and, despite the success of last year's debut event, he knows there is much still to be done :

I think last year's game proved that it could actually work in terms of the number of people that would come to the game. It also proved to the participating teams that in a very compressed season flying all this way wouldn't fundamentally negatively affect their season and that operationally we could do it well. This year is about moving away from the hype of the first regular season game to be played outside North America. It's a process of constantly doing things really well, showing the sport is growing and that there's a real fanbase for it.

Enlarging a fiercely loyal fanbase that first took root in the exploits of the Chicago Bears and The Fridge at the original Wembley stadium two decades ago is one of the main aspirations in bringing the International Series to London and Kirkwood knows what he's up against:

If you did the taxi driver test when I first started doing this work it was very much, "Oh, you used to be big in the eighties! Whatever happened to you?" I'm not suggesting for one second that we play two games and that's it - we've arrived. Over the next two or three years we aim to ditch that eighties perspective.

As last year, more than 80,000 fans, most of whom will be British, will pack the stands for the game, which is impressive for an event we're not supposed to "get". There have also been two significant developments in the battle for new hearts and minds. Firstly, BBC 2 will show the game live on Sunday (kick off 5pm), adding it to an elite list of events covered simultaneously on both terrestrial and Sky television. Secondly, NFL UK are launching not one, but two new websites. The main site has been revamped to provide the kind of information afficionados expect in a bright new format, including the facility to host blogs for their more than 150,000 members, but there's also the brand new coachstilo.nfl.com which is aimed squarely at the uncommitted:

It's interactive. It's like a soap opera / sitcom where people who are new to the sport can be entertained, but also learn about the sport.

Kirkwood also wants to do more to make the nominal host team, who are giving up one of only eight precious home fixtures, feel like it's really their game.

You're going to see a huge amount of New Orleans in-stadium banners, we'll distribute 83,000 black flags with the "Be a Saint" logo and we'll have a 20,000 person tailgate party that's Mardi Gras themed with Cajun cooking and Louisiana musicians.

Kirkwood, like many UK based NFL fans, was disappointed that injury will deprive the spectacle of the Wayne Rooney-esque talents of Saints running back Reggie Bush, but points out that both New Orleans and their "visitors" the San Diego Chargers have a plethora of talent at their disposal and very attacking mindsets. The pitch was also looking good as it basked under an array of sun lamps in the October chill and everybody will be hoping that the elements got the rain out of their system on Monday afternoon ready to let those entertainers put on the kind of show that can persuade reserved Brits to find room for the game on their roster of sports viewing. There are still a few hundred seats available, mostly returns from the States, if you'd like to experience the game at first hand.

Picture copyright of the author. All rights reserved.