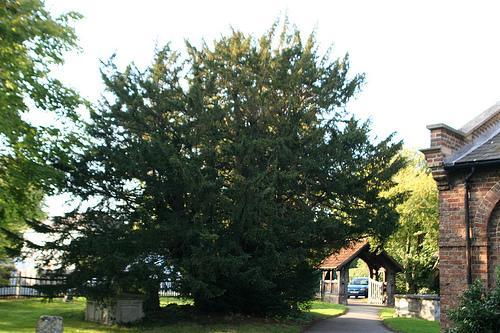 What is it? A girthful and thriving churchyard yew that tree experts have declared, after 24 years of research, to be the oldest living thing in London.

Where is it? In the yard of St. Andrew's, Totteridge, a short trek uphill from Totteridge & Whetstone station at the far northeast branch of the Northern Line. Not somewhere you're likely to stumble on during your lunch break, no, but well worth a special trip for tree lovers.

Why has it tickled our fancy? Yews, with their short and stocky profile keeping them safe from storms, have no reason to die. While the hollowed out interior makes it impossible to date precisely, experts have concluded that this one is somewhere in the region of 2000 years old, quite possibly pre-dating Londinium itself. The view from the ridge must have been grand in past centuries, and the tree has been a local landmark and meeting point for longer than we know. It's still middle aged next to Scotland's Fortingall Yew, but that's even farther away and has a wall around it. This'll do for us.

Nature notes: The church is in the crook of busy Totteridge Lane, so the spot isn't quite as silent and secluded as one would like, but it's all very green. If you continue on around the next bend, you're in farmland. We swear. The yew has nurtured its own little micro-environment of mossy ground and lurking spiders. It's loaded with berries — the flesh can be eaten but we wouldn't advise doing so, as the pips are seriously poisonous.

See below for the map.