In 2007, a Southbank Centre project "Aftershock London" harnessed the raw energy and fresh talent of local musicians and performers to collaborate under the artistic leadership of Nitin Sawhney and stage an event at the Royal Festival Hall. The 16 artists involved are now being nurtured by the Southbank Centre as Emerging Artists in Residence in what they're styling an "eclectic hub for music and performance". Keeping you ahead of the curve, we're getting closer to this multi-talented bunch of singer-songwriters, rappers, MCs and beatboxers, spoken word artists and DJs in a series of interviews. 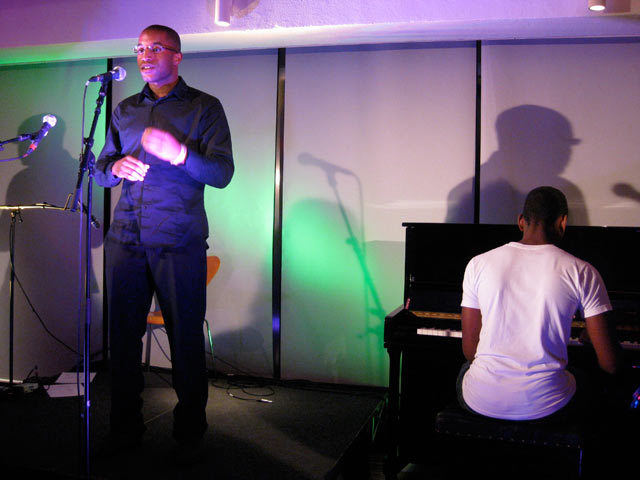 Who are you and what do you do?

My name is Yemisi Blake and I'm a Freelance Creative. I've been writing poetry for six years and over the last two years I've been collaborating with musicians who I've met as an Emerging Artist in Residence at the Southbank Centre.

When I'm not creating, I run creative writing and performance workshops, mentor young creative and manage arts projects. I've been blogging for two years and most recently I've been training and advising creative people and organizations on the use new media and internet technologies.

Where do you live and what do you like about it?

I live in Haringey, North London, all my life. When my Grandma first came to England from Jamaica in the 1960's, she raised a family just a few roads from where I live now. Knowing that my mother, aunties and uncles, played in the same parks as I did and walked the same route to the shops, makes me feel as if I have history there, albeit a short one.

What inspires you about London? What's your favourite bit?

The sound of London is amazing. I'm writing this from Berlin and where the streets are so much quieter. I love hearing conversations in passing, especially on those blazing summer days when people are extra happy.

How much time do you spend at the Southbank Centre?

I'm at the Southbank Centre at least a day a week. When I'm working on a big project, I'm there more often. For the Poetry International Festival in October, I'm mentoring two young programmers and a group of young bloggers. Over the next few weeks I'll be there quite a lot, running blogging workshops, speaking at a seminar for teachers and rehearsing for our next performance on October 18th.

What does the EAR programme mean to you?

With each passing month, the EAR programme means something new to me. Collaborating with Nitin Sawhney and the other Emerging Arists was my first experience working with musicians, taking me from a solo writer to a member of a band. Having the opportunity to curate a show on the opening night of the London Literature Festival was fantastic, the feeling that an organisation as established as the Southbank Centre believes in your ability to freely bring together a collection of artists and produce a show is inspiring. Being a mentor to young creatives as part of the London Literature Festival and Poetry international has meant that what I've experienced and learned over the last year will be useful to other people.

What do you hope to achieve through the programme?

All of our shows have a mixture of artists. We go from gothic folk to hip-hop theatre, klezmer and poetry. Through collaboration, we try to mixed all of our styles and give the audience something that hadn't expected. I hope that the people who come to the EAR events leave having experienced performances are varied, risky and engaging.

My first performance was a Hornsey Library, almost five years ago. Held upstairs in one of the gallery rooms, the library used to run a poetry night called Word4Word. I'd been going to the events for a about a year before I plucked up the courage to perform. During each event, I'd scribble down ideas for new poems and when I got home I'd sit and write them out in full. After a while, my neighbour at the time found out I was a poet and encouraged me to try out the open mic. It was a great three minutes!

One of my big inspirations is Octavia Butler, a great writer of speculative fiction, who sadly she passed away in 2006. If I could turn back time, I would have loved to read on the same bill as her. One day I hope your perform at one of the Moth's events. The Moth are a not for profit organisation based in New York that host events of 'true stories told live without notes'.

Genre specific question: who in your genre should we be watching / listening to and why?

Writing: Jay Bernard is an exciting young writer from London. Her first collection was published this year by Tall Lighthouse Press.

Blogging: Jen Lemen is an artist who blogs about live, art and inspiration.

Performance: Stacey Makishi is a Hawaii born performance artists. She's the only person I've seen get hundreds of people who blow up ballon and pop them simultaneously. Fantastic!

Great question! My honest answer is 'I'm not sure'. Maybe that's something you can better answer once you're established and looking back. I want to move forwards, get better at writing, performing and working with people. At the start of any new project, I feel like I'm emerging into a new situation. The feeling afterwards is more of satisfaction than being established.

Have you ever busked? Would you ever?

No. But I've worked in retail, there are many similarities.

The next EAR event is Saturday 18th October at 7.45pm at the Queen Elizabeth Hall and admission is free.