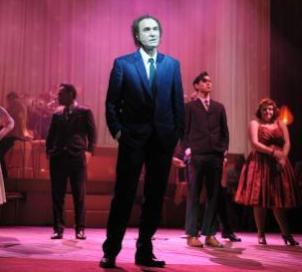 Billed as "a new musical by the legendary Ray Davies", Come Dancing is actually the product of over a decade of crafting by the Kinks front-man. Yet despite some outstanding music, it still doesn't feel entirely finished.

The show is a love letter to the dance halls of yesteryear, and specifically the glittering Ilford Palais where Davies' sisters and parents used to "dance the night away" every Saturday. The tables overspill into the auditorium, and as we arrive the actors playing his family are already dancing and mock-chatting while the band warms up. Gemma Salter is particularly endearing as the debutante who falls for Jamaican saxophonist Delroy Atkinson, while Davies himself makes erratic on-stage appearances, narrating his tale of painful family secrets, borstal boys forming bands, and the downfall of a fading crooner.

This could seem mere nostalgia if it wasn't for Davies' songs. Creditably resisting the easy option of serving up a predictable mezze of Kinks hits on a tablecloth-thin plot (probably about a Terry and Julie), instead Come Dancing is entirely fresh - bar the title song and a couple of other minor Kinks tunes. In styles from big band through early rock 'n' roll to calypso-flavoured pop, the songs are unquestionably a cut above the usual day-glo mawkishness of musical theatre. Nor has Davies' reputation for lyrical observation deserted him, as evinced by the New Town eulogy 'Stevenage'.

Come Dancing exudes the restless spirit of the time, of angry young men, changing attitudes to race and disability, and a musical revolution waiting in the wings. But it is clearly an intensely personal project for Davies, and what it needs is a brutally honest producer who can hone his vision still further. For now it's rough around the edges, despite sparkling like a chandelier.

Come Dancing plays at Theatre Royal Stratford until 25 Oct with tickets from £15 - £40. Words by James Donohue