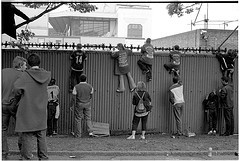 ...nor any crime so shameful as poverty. So wrote George Farquhar a few hundred years ago, and it still applies. Only not quite the way that he meant it. For it is both a scandal and a crime that children in 21st Century London can still be deemed to be living in poverty. That is, living on less than £10 a day.

A sobering 41% of all London children fall into this category. In Tower Hamlets this rises to a whopping 79%, which equates to over 42,000 kids, whilst in Tottenham the figure stands at 75%.

Trouble with today’s poverty is that it is not so easily spotted. There are no Dickensian ragamuffins, and those on the conspicuous breadline are mercifully few. Poverty now is badly fed, rather than underfed, and manifests itself as a general lack of life’s choicer experiences.

How to address the issue? Well, the government is doing the obvious things – providing school meals, giving parents advice on employment and helping with childcare. There is no magic wand to be waved, but the Campaign to End Child Poverty (which comprises the NSPCC and over 100 other organizations) are organising a march this Saturday (4th October) to raise awareness of the problem.