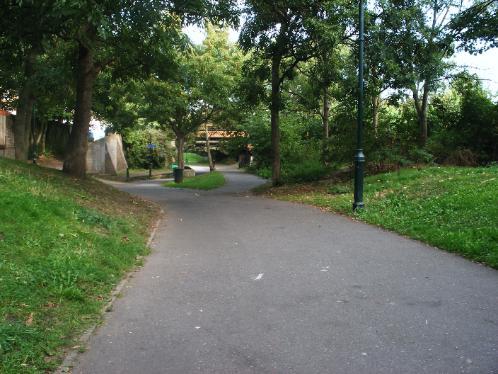 What is it? The Surrey Canal Walk, a bit of historical-but-filled-in canal. Full of green stuff. Sort of Nature-ist meets Londonist’s Back Passage.

Where is it? It runs from just behind Peckham library up to the entrance to Burgess Park – a distance of 1.1km. Walkers and cyclists share the route. Londonist actually wanted to borrow one of those whizzo motorised skateboards and video it for you – but we is scaredy-cats.

Why has it tickled our fancy? Where do we begin? It oozes atmosphere. You can almost hear the creak of the barges and see the steam rising from the horses’ backs: in places under the two bridges you can still see markings where tackle was used to step the boats through. And it offers a riot of wild and growing things. Although it is at no point more than a few metres from Peckham 2008, it feels other-worldly and other-timely. Londonist dreams of making it into a winding and wonderful sculpture park.

Nature Notes: The council has helpfully listed the most common species on boards along the route. So in no particular order you might see: hawthorn, hazel, field maple, spindle, bird cherry, geulder rose, white dead nettle, valerian, autumn gentian, teasle, sweet cicely, meadow buttercup, lesser celandine, wild columbine, cherry, plum, holly, rowan, white beam. It is rumoured that there are elder-flowers to be had that-away too. There’s a happy quietness and stillness about the place, so you can actually hear bees humming and birds a-chirruping. Foxes galore. Unfortunately where once there were voles, now there be less desirable rodents, but that is part and parcel of London living, folks.

History Notes: The 40ft wide canal was started in 1801 as an extension of the extant canal at Surrey Quays – the construction work reached Peckham in 1826, and then, er, stopped. Peckham’s iconic library and sports centre overlook what would once have been the canal basin and is now the town square. Things changed dramatically in the 20th Century, and the waterway fell into disuse – it was filled in finally in 1974, and regeneration of the route began in 1995. By the way, if you want to visit it, tomorrow sees it with a Green Fayre spread all over it.