Getting Wasted At Windsor Castle 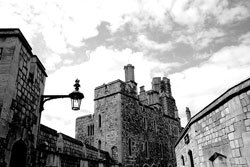 The Queen Mother may be dead, but suspicions that her boozehound ways remain were given succour on Wednesday when twelve barrels of lager were delivered to Windsor Castle mere hours before the Croatia-England match kicked off.

Our royal family and the national game aren't natural bedfellows: the blue bloods tend to prefer classier sports like foxhunting, horsey dancing, and sneering at the masses, while Princes Hazza 'n Wills trot out a St George flag every few years and rah-rah over England's flailing football excursions in the World Cup. So the delivery of the equivalent of 2,000 pints of beer in advance of such a crucial game caused consternation among Castle footmen and flunkies. Was Prince Philip about to declare his love of the Three Lions with a boozy bender, or would the shipment prove as popular as a genetically modified pear at Prince Charles' picnic?

Fortunately, a more sober answer was forthcoming. The intended recipient was nearby namesake "The Windsor Castle", a pub located five miles away Maidenhead. The pub's landlord revealed that they often receive goods destined for the Royal residence - corgi cufflinks perhaps, or SS uniforms for ripping good fun at the next Colonials and Natives bash - yet this was the first time a shipment sent to the pub has been so mislaid. Had it been a case of gin, and had dear Queen Mum still stalked the corridors, it would've been snaffled quicker than a rat up a Royal drainpipe.

Image from LaMadrileña's Flickrstream via the Londonist pool