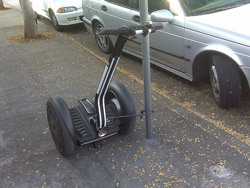 Lembit Opik, professional HAB* to one Cheeky buttock and occasional MP for Montgomeryshire, has staged a protest highlighting the roadworthiness of the seldom seen Segway. Mr Opik and his partners in crime, Tory peers Lord Atlee and the Earl of Liverpool, are riding a Segway up and down the Houses of Parliament, in a flagrant breach of the law which states that the scooter may not be piloted on highways or pavements. The trio are promoting a Conservative and Lib Dem motion to change the law and allow Britain's 2,000 Segway owners to drive them in cycle lanes.

Championing its flexibility and environmental credentials (though staying curiously silent on its £4,300 price tag), Mr. Opik, who regularly rides a Segway around his constituency, described the vehicle as the "biggest step forward in transportation since the Wright brothers". He could go further - it's the biggest step since our evolutionary forefathers mastered bipedalism, henceforth enabling us to trot along at roughly the top speed of the Segway.

We salute Mr. Opik for bringing this urgent issue to the attention of our government. It is clearly a matter of great import to Britons - never mind the state of the economy, the right of a man to traverse this great city using an overpriced, underpowered leg replacement must be enshrined in law.

(*HAB = Husbands and Boyfriends. It'll catch on, just you wait.)

Image from kendrak's Flickrstream under the Creative Commons Attribution license