Are We All Related to Big Bird?

By SallyB2 Last edited 171 months ago
SallyB2 Are We All Related to Big Bird? 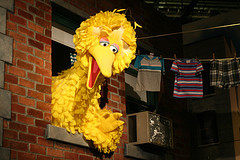 Well, no, probably not in the biological sense. But Londonist was excited today to learn about what must surely be one of the first ever Londoners.

German palaeornithologists (now there’s a good one for What’s My Line?) have produced a paper on the discovery of the well-preserved skull of a very big (albeit somewhat dead) bird buried in London clay near the Isle of Sheppey. The Dasornis (named by Owen in 1869: why didn’t he call it Owen? - we’ve never understood this naming thing) was a Pelagornithid, which means it was a bird with false teeth. We don’t mean of course that it actually had dentures, but rather that it had evolved boney bits in its don’t-mess-with-me beak which ensured that it did not drop any slimey, fishy prey which it acquired. The birds would have had a wingspan of 5 metres – in other words that of a small plane - and are believed to have been widespread across London, Essex and Kent around 50 million years ago (that's the Eocene period, but of course you knew that). Their nearest modern relatives are geese and ducks, although we can’t personally envisage feeding one at the park.

Anyway, this is cool for two reasons as far as Londonist can see. One is that in the vast, flat, largely featureless landscape that is South Essex/North Kent something as exciting as a dinosaur skeleton has emerged. And secondly, this creature has to be the dude of bird land – man, he must have been quite something on the wing.

Thanks to IanVisits for the heads up on this.

Big Bird is from delgrosso’s flickr stream under the Creative Commons Licence.