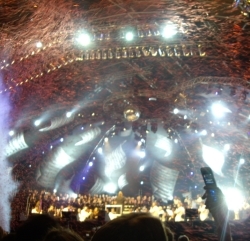 Famed musical theatre composer Andrew Lloyd Webber has come up with a catchy tune or two in his time; annoyingly catchy, some of them. After attending his 'birthday' party (six months too late, as the man himself pointed out) in Hyde Park last night, we still have several of his bloody "Ohrwürme" swimming around in our grey matter. Beware! The Phantom of the Operaaaaaaaaah! Ahem.

Middle England came to London for the event; picnic hampers, camping chairs, rugs, and pasta salads in Tupperware were much in evidence. Territory was jealously guarded, but we managed to wend our way nearly to the front, where we had an excellent view of proceedings. Comprising selections from Jesus Christ Superstar, Joseph, Evita, Cats, and Phantom, etc., and followed by a fireworks display, it turned out to be a heart-warming cheesefest of spectacular proportions.

Joss Stone, wearing an almost indecently short skirt, started off the concert, followed in quick succession by a galaxy of musical stars. Broadway diva Idina Menzel was a helium-breathed and faintly annoying Evita; Andrew's cellist brother Julian played the crowd-pleasing Variations on a Theme by Paganini; Duncan "Blue" James, Jason Donovan, Connie "Maria" Fisher, Hayley Westenra, Denise Van Outen, Lee "Jason" Mead and many others sang their little hearts out, ably accompanied by the Crouch End Festival Chorus, Capital Voices, and the BBC Concert Orchestra, whose percussion section in particular looked like they were having an absolute ball.

Highlights: shivering in delight as Elaine Paige sang Memory; nobody does it better, it's true. And, of course, Rhydian in full Phantom mode. We vote Rhydian for the lead in ALW's forthcoming Phantom sequel - which the composer announced onstage will be called Love Never Dies, and is scheduled to open next summer. Compère John Shark Attack 3" Barrowman did his best to steal the show - his picture in the programme was as large as ALW's! - but in the end, it was all about the music. Now, does anyone have a cure for ear-worms?